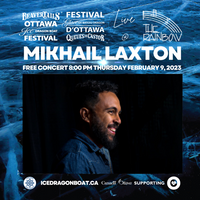 The BeaverTails Ottawa Ice Dragon Boat Festival is pleased to present an evening with Mikhail Laxton.

As 2020 got underway, Ottawa-based singer/songwriter Mikhail Laxton was set to open the next chapter of his life with the release of his debut EP, Real, a collection of Soul-folk gems. But what should have been the wider world’s introduction to the Australian-born artist’s immense talent—already established in his homeland through appearances on Australia’s version of The Voice—was lost in the cacophony of pandemic confusion.

Mikhail coped the only way he could, by wiping the slate clean and re-emerging with a new crop of songs drawn from the core of his being. His new album is simply entitled Mikhail Laxton, because it is who he is.

The contrast between his first EP and Mikhail Laxton is striking. On “Something That Was Gone” he takes stock of the past two years in meditative fashion, almost as if channelling Otis Redding’s “Dock Of The Bay.” “Maybe It’s A Good Thing” continues in that vein, suggesting that change always brings hope, regardless of the circumstances. Meanwhile, other tracks take Mikhail’s sound in new directions, such as the deep country-Soul of “Streams,” the sultry, vintage R&B of “Slow Motion,” and the driving rock of “Leaving You With Less.”

Not only does Mikhail Laxton fulfill the promise of his debut, it firmly establishes him as one of the most vital new voices within the Canadian music scene. No matter what genre labels are placed upon him, there can be no disputing that Mikhail Laxton has his own timeless sound, the product of a unique life experience.